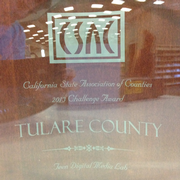 Editor's Note: The Tulare County Libary's Teen Digital Media Lab was recently recognized by the California State Association of Counties for being one of the most innovative and creative programs among Counties in the State. Below is a blog post composed by CSAC's Deputy Director of Public Affairs and Member Services David Liebler.

April is National County Government Month. During the month, CSAC is producing a series of videos and blog postings highlighting California Counties’ best practices. The programs we are spotlighting are recipients of our annual Challenge Awards, which recognize the innovative and creative spirit of California county governments as they find new and effective ways of providing programs and services to their citizens. The Challenge Awards provide California’s 58 counties an opportunity to share their best practices with counties around the state and nation. The Call for Entries for the 2014 CSAC Challenge Awards is being distributed this month; the entry deadline is June 27, 2014.

When Faythe Arredono talks about Tulare County’s Teen Digital Media Lab, her eyes light up. That sparkle is only matched by the teenagers who participate in the program. Ask the likes of students Araceli Mendoza or Vincent Macareno and you can see why this program has such a positive impact.

Tulare County library staff knew they could do a better job of connecting teens through the library, but the question was how. “We tried some things. Some worked, some didn’t, but we could never really get anything off the ground,” explained County Librarian Jeff Scott. That’s where Faythe Arredondo comes in. She was hired in 2011 as the County’s first-ever Teen Services Librarian.  Right away she started exploring ways to get teens engaged digitally. With the help of a grant from the California State Library, she was off and running.

Arredondo purchased equipment – including Macbooks, iPads, software and a television — and then the teens took over.  It wasn’t long before they discovered they each had a “niche of creativity,” as County Librarian Scott puts it.  The teens were given the freedom – and responsibility – to do what they wanted.  And what they did was create the County Librarian’s Summer Reading Program, utilizing the digital tools to which they now had access.

The teens decided on a program based on the board game Clue.  They had to create a video version of the game, write the script, act in the videos, shoot the videos and upload it to the web. The result is an entertaining series of videos titled, “A Summer to Die For.”

“We worked on it for months and then we finally got to see how everyone reacts to it,” explained 11th grader Vincent Macareno. “It’s awesome; it’s a great feeling.”

For the teens involved, the digital lab has been a great learning experience on a number of fronts. For Araceli Mendoza, it meant learning software that she will use as she pursues her dream of becoming a graphic artist. For Gunner Santos, it was learning basic computer skills. Tenth grader Jessika Salgado has learned how to meet deadlines; her older sister Erica has learned how to take charge and be responsible.

And for Teen Services Librarian Faythe Arredondo, it means overseeing a program that has is “beyond her wildest expectations.”