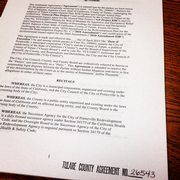 Several years of negotiations between Tulare County and the City of Porterville related to land use and the process for possible collection of impact fees wrapped up this week.

Tulare County and Porterville finalized a settlement agreement on Tuesday that outlines measures to coordinate land use in unincorporated areas just outside city limits; establishes a process for consideration of the future collection of impact fees; and ends lawsuits the entities have filed against each other related to the County’s General Plan Update and a Redevelopment issue.

Fifth District Supervisor Mike Ennis, who represents the Porterville area, said the MOU is a win-win for the County and Porterville.

“Porterville doesn’t want to spend millions on fixing roads and infrastructure to make these areas compatible with city services and standards,” Supervisor Ennis said. “In return, the County can be assured that in the future Porterville will collect county impact fees that help pay for much needed infrastructure used by city and county residents alike.”

Highlights of the settlement agreement:

- All construction within Porterville’s sphere of influence will be built to city development standards.
- The County will recognize city plans for infrastructure within the city’s 50 year boundaries.
- Porterville will receive $750,000 in Rule 20A Underground Utility Project funds.
- County will drop Redevelopment lawsuit.

- In the future, the City of Porterville will consider the collection of impact fees within the city on behalf of the County. (There are currently no impact fees in place)
- The County and City will work together to recommend a sphere of influence for the City to LAFco.
- Upon completion of the projects under the settlement agreement (targeted within the next year), the County will assist the City with improvements through a transfer of $750,000 in Rule 20A Underground Utility Project funds.
- City will drop General Plan Update lawsuit.