Updates from Board of Supervisors visit to Washington, D.C. 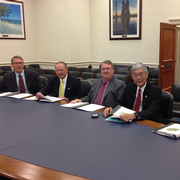 Four members of the Tulare County Board of Supervisors and County Administrative Officer Jean Rousseau are in Washington, D.C. this week to visit with lawmakers and staff to lobby for issues important to Tulare County.

Discussions with the Director and Deputy Director of U.S. Forest Service focused on marijuana eradication and investigation efforts on Forest Service lands.  Supervisor Ishida expressed the county's concerns regarding increasing county costs to address the illegal cultivation sites and the belief that illegal activity would increase on public lands as the county Sheriff's Department and code enforcement continue to focus on illegal valley floor cultivation sites.  The group discussed potential solutions and methods of maximizing available resources and the Board will follow up in upcoming meetings on its funding concerns.

The Board met with the Army Corps of Engineers to discuss the status of Lake Success and was able to speak with Corps District and Division staff as well as the Civil Deputy to obtain detailed information regarding the Lake Success project.  Supervisor Ennis explained that it is the county's desire to begin the dam enlargement project that has been delayed since 2003 and to be emphasized the need to utilize the full storage capacity of the dam until the enlargement project can be completed.  As a result of the meeting, the Corp committed to providing a letter authorizing the full storage capacity and to bi-weekly conference calls with Supervisor Ennis so that he may update local stakeholders on the project's status on an ongoing basis.  The Board also encouraged Corps staff to streamline processes necessary to moving forward with the enlargement process and staff agreed to do so.

Supervisor Worthley opened the meeting with a discussion of the county's request to modify the USDA's Rural Community Water system grant program and the need for such modifications.  Chairman Cox followed with a request that the Congressman support reauthorization of the Payment in Lieu of Taxes (PILT), State Criminal Alien Assistance Program (SCAAP), and the Secure Rural Schools and Community Self Determination Act.  Each of these programs provides critical funding to the county.  State water needs and drought relief needs were expressed by Supervisor Ishida and Congressman McCarthy stated that the House was looking forward to a Senate water bill. Discussions also addressed the ongoing need for continued marijuana cultivation prosecution.  Congressman McCarthy shared the results of his recent meetings with the Corps regarding Lake Success and Supervisor Ennis outlined the content of the Board's earlier meeting with the Corps. Congressman McCarthy's office offered to participate on the bi-weekly calls with the Corps in order to monitor the Lake Success project and timelines.

Due to scheduling changes for the Congressman, the Board met with Congressman Nunes earlier in the day than previously anticipated.  The Congressman also stated that he, like Congressman McCarthy, was looking forward to a Senate water bill.  Chairman Cox once again outlined the county's critical federal issues and requested the Congressman's support.

Although Costa does not represent Tulare County, his district shares very similar concerns related to water resources and drought relief.  The Board expressed its views on the need for surface storage, and Supervisor Ishida offered the Congressman specific examples of the economic impacts anticipated as a result of the crops and the need for drought relief for permanent crops.

Supervisor Ennis shared the content of the Board's meetings with the Army Corps of Engineers and Senate Appropriations staff and requested ongoing support from House appropriators for the Lake Success project.  Staff was helpful in providing an explanation of the necessary steps that would need to be achieved in order to receive ongoing funding.  The information will assist the Board in its follow up meetings with the Corps and help to reduce further project delays.

Chairman Cox began discussions by explaining the impact of the State Criminal Alien Assistance Program (SCAAP) on the county's Sheriff Department, providing staff with information showing that only 7.97% of the Department's costs were reimbursed by the program in 2012.  The Board then discussed the need for ongoing marijuana eradication funding, funding for the Eastern Districts Courts and U.S. Attorney, and the need to ask the Department of Justice (DOJ) to revisit its overtime cap rule.  The cap currently limits, across all federal funding, any individual from receiving more than a set amount in overtime reimbursement.  With limited marijuana eradication staff and a large number of illegal cultivation sites, the cap restricts the Sheriff's Department from utilizing federal funding for some individuals and instead requires the Department to use its General Fund budget, even when cultivation sites are on federal land.  The Board requested that appropriations staff ask DOJ to review the policy.

The Board met with several representatives from the United States Department of Agriculture (USDA) on Wednesday afternoon.  Supervisor Ishida explained drought impacts to local farmers and asked for USDA assistance for areas not currently identified in emergency drought relief funding.  USDA disaster relief staff explained several potential relief programs and indicated those programs would open applications on April 15.  USDA Risk Management staff explained some of the components of crop insurance programs.  Additional programs related to conservation funding were also explained by USDA staff.  Lastly, a broad overview of the steps that the Deputy Under Secretary of Natural Resources and Environment is taking to address drought related issues was presented.  USDA staff indicated that local meetings would be forthcoming to educate local farmers on disaster relief and other programs.

The Congressman had to cancel his afternoon meetings so the Board did not meet with him.

The Board met with the Congressman and staff to review all of the county's key federal issues.  The Congressman has agreed to assist the Board in its efforts to seek a modification to USDA Rural Water grant programs so that severely disadvantaged communities may more easily access the funding and to continue to assist the county in its effort to obtain a waiver for the Department of Justice's overtime cap policy.  Supervisor Ennis updated Congressman Valadao on the week's discussions related to Lake Success and asked for continued support for the project.  Supervisor Ishida discussed recent cuts to U.S. Forest Service Law Enforcement funding and its impact on public lands and the county's ability to assist this valuable partner in its efforts to control marijuana cultivation sites on public lands.

The Board met with staff from Senator Boxer's office and briefed staff on county issues.  Supervisor Ennis thanked Senator Boxer for her prior support of Lake Success and requested that her support continue through completion of the enlargement project.  Supervisor Ishida discussed the drought impacts to farmworkers and highlighted the fact that drought related economic impacts would be long term.  Staff indicated the Senator was working on longer term water policy legislation and offered to share a draft of the legislation with the Board Supervisors for their input.  Additional discussions regarding water included the need for water storage, both groundwater and surface, and the need for watershed restoration programs which will require federal partner cooperation.

The Public Lands subcommittee is the committee in charge of reauthorization of Payment in Lieu of Taxes (PILT) and the Board discussed various ideas and options that the committee is considering in order to achieve reauthorization.  The Board also brought up the issue of inadequate funding for public lands law enforcement.  Staff requested a Board letter outlining the current law enforcement situation, funding status, and some of the Board's ideas as to how to improve the current status.

The purpose of the meeting was to discuss both HIDTA funding and the federal overtime cap.  ONDCP Acting Deputy Director Mary Hyland agreed to assist in determining the basis of the Department of Justice overtime policy and to bring the issue up for discussion at the next Public Lands Coordinating Committee meeting.  The Board discussed HIDTA marijuana funding and requested ongoing support for the county's eradication efforts.