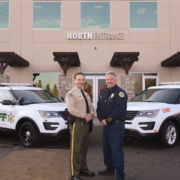 On Wednesday morning, Sheriff Mike Boudreaux welcomed hundreds of guests to the Grand Opening for the new headquarters of the Tulare County Sheriff’s Office and the Tulare County Fire Department on the 800 block of South Akers Street, in Visalia.

Regarding the new headquarters building, Sheriff Boudreaux thanked the Tulare County Board of Supervisors for the having the vision for the future for the Sheriff’s Office.

“We are a growing county,” he said. “The department of the Sheriff and the department of Fire are growing to meet the demands that require us to have a building such as this one behind us.”

Moving into the new headquarters represents another step toward modernization for the Sheriff’s Office. Its previous headquarters was built during the 1950s.

“The new headquarters leapfrogs us into a modern law enforcement agency,” he said. “This building represents a professional atmosphere.”

After Sheriff Boudreaux made his remarks, Fire Chief Charlie Norman also thanked the Board of Supervisors.

“It is one of two of its caliber in the county,” he said.

Bicycles given to Junior Explorers

Lt. Harold Liles, Jr., explained that the children who were chosen to receive new bicycles Wednesday were being rewarded for getting good grades and for trying their best to be good role models among their peers.

Throughout the year, the Sheriff’s Office gives away up to 200 bicycles to Junior Explorers thanks to generous donations from businesses and community members. Junior Explorers get to go on a camping trip to the Central Coast in the summer, to the Tulare County Fair and to the International Agri-Center for a holiday party.

Soon, Lt. Liles said he will offer sporting events for the youngsters.