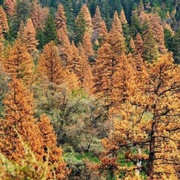 Tulare County Board of Supervisors continues local emergency proclamation of Tree Mortality in the County. The Board voted unanimously to reaffirm the action in order to gain available funds and create awareness of the dead and dying trees in the higher evaluations.

"More than ever we need to continue to push forward on this monumental problem in our County," stated District Four Tulare County Supervisor and California Tree Mortality Task Force member, Steve Worthley. "This action confirms our tree mortality problem still exists and the need to continue our work with the U.S. Forest Service to address tree mortality."

The Board's action comes the day after the U.S. Forest Service released of the latest numbers of the 2017 California Tree Mortality Aerial Detection Survey.

According to the 2017 survey results, California now has 129 million dead trees in its forests. An additional 27 million from the previous year. Amongst the affected areas in the state, Tulare County is home to the highest number of dead trees with 25.2 million.

"Tulare County is the heart of the tree mortality crisis in California," stated District One Supervisor Kuyler Crocker, during today's Board meeting. "Our County has more dead trees than anywhere in the state and our forests are a major part of our County."

Dead tree removal projects are underway across Tulare County and the state. To date, Tulare County has utilized local resources and County funds to remove over 10,000 dead trees that pose a threat to public safety along County roads.

Collectively, the California Tree Morality Task Force has removed over one million dead trees, using a triage approach to this tree mortality crisis, first focusing on public safety by removing dead and dying trees in high hazard areas. However, current removal efforts are not slowing down the staggering tree mortality numbers.