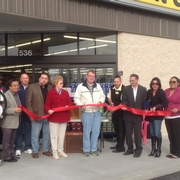 South Tulare County residents now have another retail option in the unincorporated community of Earlimart.

The nation’s newest Dollar General opened its doors at the White River Plaza located at the northeastern corner of Avenue 56 (Sierra Highway) and CA State Route 99, in Earlimart, CA.

The construction of the 9,100 square feet building is complete, the shelves are being stocked, and the final details are being completed prior to the opening.  The new Dollar General officially opened to the public on Saturday, February 15, 2014, according to Bob Munoz, the District Manager of Operations for Dollar General.

“Dollar General has more retail locations in the United States than any other retailer with over 11,000 stores in 40 states from coast to coast,” said Michael Washam, Tulare County Economic Development Manager.  “The new store will offer shoppers the products they use and replenish most frequently, such as packaged foods, snacks, pet supplies, health and beauty aids, cleaning supplies, paper products, basic apparel, housewares and seasonal items.”

White River Plaza is a 7.5 acre development project that was approved in 2013 by the Tulare County Board of Supervisors.  The project is being developed by two local economic development professionals, Tom Hocking and Max Bacerra.

“It is wonderful to be a part of the economic growth and progress of the Earlimart community,” said Max Bacerra, Principal – White River Plaza, LLC. “There are a variety of new retail and commercial opportunities that will be added to the White River Plaza retail shopping center.  We plan to roll out more uses and businesses in the 2014.”