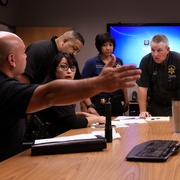 Deputies made sure registered sex offenders were where they were supposed to be and not decorating for Halloween to attract children to their homes, Sheriff Boudreaux said.

“Safety for our children is an absolute must and priority each and every day and especially on Halloween,” he said. “We will be vigilant to protect them.”

Operation Baby Face is an ongoing effort to protect the innocence of children in Tulare County and to keep them from harm.

In August, the first phase of Operation Baby Face dismantled a human trafficking ring in Tulare County, netting 15 arrests for sexually exploiting 23 juveniles and 29 adults. Later that same month, as part of Phase II, seven men were arrested during an undercover operation similar to “Dateline NBC: To Catch a Predator.”

And 15 registered sex offenders were out of compliance, that is, they were not living where they said they were living and warrants will be issued for their arrests.