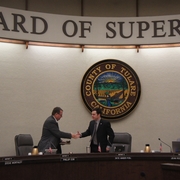 The Tulare County Board of Supervisors elected a new Chairman on Tuesday, selecting District Three Supervisor Phil Cox to the top position.

Supervisor Cox replaces District Two Supervisor Pete Vander Poel, who served as Chairman in 2013. District Four Supervisor Steve Worthley was selected to serve as Vice Chairman. Each member of the Board of Supervisors performs the duties as chairman through a rotation process. The chairman is charged with setting and running weekly meetings and attending functions on behalf of the Board, among other additional duties.

“Pete took the bull by the horns last year and did a fantastic job,” Chairman Cox said. “His leadership was appreciated.”

During the meeting, Supervisor Vander Poel passed a new gavel to Chairman Cox, and later delivered a wrap up speech for 2013. Supervisor Vander Poel highlighted programs and projects the County initiated in 2013, such as a wellness program for employees, drafting tougher marijuana policies for the unincorporated areas, increasing accessibility through holding night meetings for the public, and developing a nuisance property abatement program.

“Although I cannot say that all challenges were completely addressed over the last year, I do feel that efforts were undertaken that pointed Tulare County in the right direction,” Supervisor Vander Poel said. “I think that 2013 was a great year for Tulare County and its residents. I want to thank my colleagues, County Administration, and all County Departments and employees for their tireless and outstanding work to improve life in our County.”

Chairman Cox also announced he will deliver the annual State of the County address at the Board of Supervisors 9 a.m. meeting on January 28.