Supervisors in Washington, D.C. this week 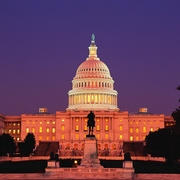 The Tulare County Board of Supervisors and senior staff today will begin a series of meetings with Federal officials in Washington, D.C.

Tuesday’s meetings will include the following topics: Lake Success, potential federal budget impacts to Tulare County, marijuana cultivation on public lands, Secure Rural Schools, and the Payment in Lieu of Taxes (PILT) program. All full list of topics and requests are listed below.

Chairman of the Board of Supervisors Pete Vander Poel said past visits to Washington, D.C. have proven to be beneficial and have helped obtain federal funding for Tulare County.

During this week’s visit to Washington, D.C., the Board of Supervisors is scheduled to meet with the offices of Congressmen Devin Nunes, Kevin McCarthy and David Valadao. In addition, meetings with staff of the House Appropriations Subcommittee on Energy & Water, the Senate Committee of the Budget, House Appropriations Subcommittee on Interior & Environment, the Office of National Drug Control Policy, the Department of the Interior, the Department of Justice, and the United States Forest Service have been scheduled.

The Board of Supervisors has scheduled its visit at the same time as the Tulare County Association of Governments’ annual One Voice visit.

The Board of Supervisors will address the following federal priority issues in Washington, D.C.

Payment in Lieu of Taxes (PILT)

Payments in Lieu of Taxes" (or PILT) are Federal payments to local governments that help offset losses in property taxes due to nontaxable Federal lands within their boundaries. The Moving Ahead for Progress in the 21st Century Act (MAP-21) was signed into law on July 6, 2012 and included a one year extension of the PILT program.  Tulare County received $2,914,692 in 2012 for 1,533,603 acres.

Request: Reauthorization of Payment in Lieu of Taxes.

Bureau of Justice Assistance, U.S. Department of Justice administers the State Criminal Alien Assistance Program (SCAAP) in conjunction with the Bureau of Immigration and Customs Enforcement (ICE) and Citizenship and Immigration Services, Department of Homeland Security (DHS). SCAAP provides federal payments to states and localities that incurred correctional officer salary costs for incarcerating undocumented criminal aliens with at least one felony or two misdemeanor convictions for violations of state or local law, and incarcerated for at least 4 consecutive days during the reporting period. The Department of Justice extended, through 2012 only, its reimbursements for the unknown category of SCAAP inmates.  Tulare County received $734,292 in 2012.

Request: Full funding for SCAAP and elimination of plans to discontinue SCAAP reimbursements for criminal aliens not currently tagged as “known” in the Immigration and Customs Enforcement database.

The Moving Ahead for Progress in the 21st Century Act (MAP-21) was signed into law on July 6, 2012 and included a one year extension of the Secure Rural Schools and Community Self-Determination Act, providing funding at 95% of the 2011 levels.

Provide an update on the 2012 marijuana eradication efforts within the County, including activity on Federal lands.

Request: Provide funding to increase the number of Federal Judges in the Eastern District, including the Fresno Division.

Since 2003, delays associated with the Seismic Remediation Project for Lake Success have created hardships for the local community, limiting storage and reducing irrigation and flood control storage for the Tule River Basin.  Currently, the Final Baseline Risk Assessment Report is being prepared for review and approval by the Senior Oversight Group and final approval by Assistant Secretary of the Army for Civil Works.

Request: Signature on a letter requesting the Assistant Secretary of the Army for Civil Works to ensure that the timeline for review and approval of the Final Baseline Risk Assessment Report remains on schedule.

The prior 2008 Farm Bill expired in 2012 and portions of the bill were extended for nine months through September 30, 2013.  A new five-year bill has not been introduced.

Tulare County has a large number of public water systems unable to provide safe drinking water The vast majority of these systems are in disadvantaged or severely disadvantaged communities which lack the resources to fund preliminary design and/or engineering in order to develop sustainable solutions.