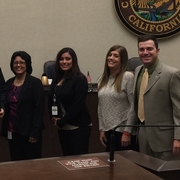 Alcohol and drug abuse in this Nation have reached epidemic stages and early substance abuse increases the likelihood of a person developing psychiatric disorders in his or her late twenties. It is imperative that visible, unified prevention education efforts by community members be launched to eliminate the demand for drugs.

When parents, educators, law enforcement, faith organizations, and community members unite in opposing illicit drugs, young people are much less likely to engage in drug use. Red Ribbon Week will be celebrated in Tulare County, and every community across the nation during the week of October 23-31 2016

The Tulare County Board of Supervisors proclaimed the week of October 23-31 2016 as “Red Ribbon Week” in Tulare County at their October 18 Board meeting. Calling upon the citizens, public and private institutions, businesses and schools in Tulare County to recommit our community to increasing awareness and drug prevention education activities, making a visible statement that we are strongly committed to a drug-free State.