We Bid Farewell to Two Supervisors 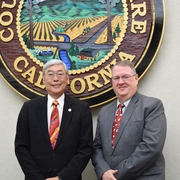 In the New Year we will all see two new faces up on the dais in the Board of Supervisors Chambers as we bid farewell to Supervisor Phil Cox and Supervisor Allen Ishida.

Supervisor Cox joined the Board in 2004 elected to represent District Three, which encompasses primarily the City of Visalia and immediate surrounding areas. Contractor by trade, Cox was no stranger to public serve. Before joining the Tulare County Board of Supervisors, Cox served as a Councilman on the Visalia City Council.

During his tenure as a Supervisor, Cox created the Board’s Step Up Gang Prevention Program and served as Chairman to the Gang Task Force. He was a strong advocate for the passage of Measure R working to improve roads and transportation projects in Tulare County.

In regards to his departure from the County, Supervisor Cox had this to say - “It’s been great to have had the opportunity to work with a team of devoted individuals who care about Tulare County and its people.”

Cox and his wife Connie reside in Visalia as the proud parents of 7 children and 15 grandchildren. Although he is departing the Board of Supervisors, Cox is not stepping away from public service as he heads back to Visalia City Council as the District Two Councilman elect.

Supervisor Ishida will be retiring from the Board after twelve years of service to Tulare County. Also joining the Board in 2004 alongside Supervisor Cox, Ishida represented District One that encompasses the cities of Exeter, Farmersville, Lindsay and portions of Visalia; in addition to Three Rivers and other mountain communities.

During his time on the Board, he took on water issues and worked to revitalize the County’s Water Commission and Flood Control Commission. Serving on the California Freight Advisory Committee, he was a strong advocate for the rail and freight distribution systems.

He also supported sound efforts in sustaining the County’s natural resources in serving on the Yosemite Sequoia Resource Conservation & Development Council, Sierra Nevada Conservancy Board, and the Agriculture & Natural Resources Policy Committee for the California State Association of Counties.

Reflecting on his time as a Supervisor, Ishida notes all the work that has been done on healthcare in the County. Including the progress of replacing county-run healthcare clinics to outside providers and utilizing a third party provider for the county jail’s healthcare program.

“I’m not going too far,” stated Supervisor Ishida. “I will remain active in some capacity and will be available for any needs Tulare County may have.”

Outside his work as a County Supervisor, Ishida is an avid outdoorsman who enjoys hunting and fishing. He functioned as the Board’s bonafide citrus farmer and still farms many varieties of citrus near his hometown of Strathmore with his wife Wanda.

Both Supervisors have made countless contributions to the people of Tulare County during their years of service. Their presence will be missed, but we hope to see them pop their heads back in the Board Chambers every now and then on a random second Tuesday of the month.