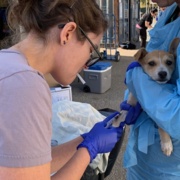 Tulare County Animal Services (TCAS) is working with shelter medicine programs from UC Davis, the University of Wisconsin-Madison, and the San Francisco SPCA to address the finding of Canine Distemper Virus (CDV) in dogs and a coyote that came into the shelter between October 23 and 28, 2019.

CDV is a highly contagious disease most often spread through bodily fluids (nasal discharge, saliva, feces, urine) of an infected animal. The virus has a five-day to six-week incubation period between exposure and onset of symptoms, and it attacks the respiratory, gastrointestinal, and nervous systems of dogs. CDV is often fatal, and dogs that survive usually have permanent nervous system damage.

Several cases were discovered after the dogs were sent to partner rescues, and 13 cases were dogs who have since tested positive in the shelter population. TCAS vaccinates every dog for CDV on intake and currently disinfects with a product that eliminates the CDV virus with cleaning protocols that adhere to best practice standards.

“Several dogs with symptoms came to the shelter from the community, so we believe that the current disease is originating outside of the shelter in largely unvaccinated animal populations,” notes Cassandra Heffington, TCAS Manager. “This means that dogs are potentially being exposed prior to being vaccinated at the shelter, coming into the shelter and showing symptoms while in the shelter, and passing the disease to other dogs in the shelter.”

TCAS worked quickly to collaborate with UC Davis and the University of Wisconsin and are following recommendations for a very aggressive response strategy with regard to population and intake.

At this time, puppies that are not legally required to remain at the shelter for hold are being rerouted immediately to rescue organizations on intake. These recommendations are designed to save as many animals as possible.

TCAS is informing partner organizations, including rescues and city shelters, of the possibility of distemper in their areas of operation, particularly in the southwest portion of the county. Moreover, TCAS is beginning to plan large-scale, low- or no-cost vaccination clinics in areas that data discover are “hot spots” in the community.

The remainder of the TCAS shelter population affected by exposure is being tested through a partnership with SFSPCA. Following testing results, a plan will be developed for the exposed dogs in the shelter.

Vaccination is crucial in preventing canine distemper. The vaccination for CDV is very effective and requires four to 48 hours for the dog to begin to see full immunity. TCAS strongly encourages community members to ensure their pet vaccination schedule is up to date, avoid contact with infected animals or wildlife, and use caution when socializing dogs at dog parks, obedience classes, or doggy day care.

There is no cure for distemper, and veterinarians diagnose the disease through laboratory testing. Initial symptoms include a watery or pus-like discharge from the eyes, fever, nasal discharge, coughing, lethargy, reduced appetite, and vomiting. Treatment consists of supportive care for symptoms such as vomiting, diarrhea, neurologic symptoms (circling behavior, head tilt, muscle twitches, convulsions and salivation, seizures, and paralysis) and administration of fluids to prevent dehydration.